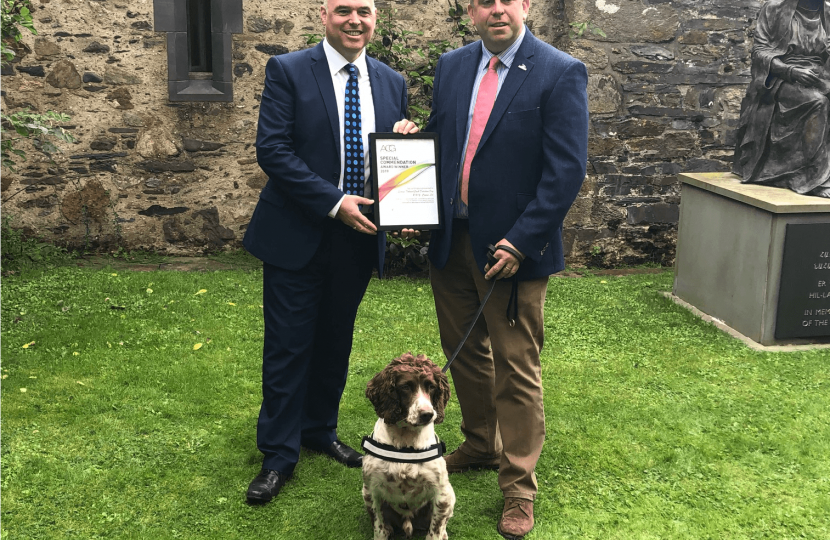 An award ceremony to praise local specialist search dog Scamp was recently attended by local Assembly Member Paul Davies. Scamp, who is an eight year old Springer Spaniel, has been a tobacco and cash detection dog for over six years and has helped Police, Trading Standards and Her Majesty’s Revenue & Customs to recover over £8 million pounds-worth of illegal tobacco and over £4 million in cash, connected to serious and organised crime. As recognition of Scamp’s outstanding work, he has been awarded a Special Commendation for Excellence in Anti-Counterfeiting Enforcement.

Mr Davies commented, “I was delighted to attend such an important award ceremony, rightly celebrating Scamp’s outstanding work with law enforcement agencies across the country. Scamp is doing an important job in tackling serious and organised crime and I understand that he’s already seized £8 million pounds-worth of illegal tobacco and over £4 million in cash – which is no small feat.”

He added, “This is also testament to the team at B.W.Y. Canine who do a wonderful job in  providing and training detention dogs. Thanks to their hard work and diligence, Scamp is able to do his job to the highest standard and help keep our streets as safe as possible.”

A campaign to support young carers across Wales is being back by Preseli Pembrokeshire Assembly Member, Paul Davies.