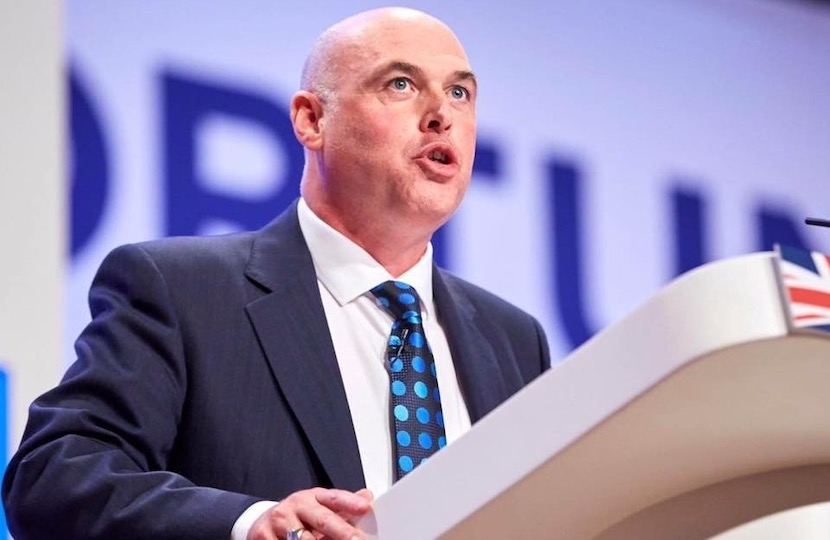 Paul Davies was born in 1969 and grew up in Pontsian just outside Llandysul in the County of Ceredigion. He attended Tregroes Primary School, Llandysul Grammar School and after studying his A Levels at Newcastle Emlyn Comprehensive School, he joined Lloyds Bank in 1987.

Up until being elected, he continued to be employed by Lloyds Bank and his last role with the company was as a Business Manager based in Haverfordwest helping to support small businesses.

In February 2000, Paul fought the Ceredigion Parliamentary by-election and improved the Welsh Conservative Party's position from fifth place in the previous Assembly election to third place and pushed Labour into fourth place.

He also fought the 2001 general election as the Parliamentary candidate for Ceredigion. In 2003, he fought Preseli Pembrokeshire in the Welsh Assembly election where he increased the share of the vote from 23% to 30%. He improved the Welsh Conservative Party's position from third to second place and only 1,326 votes behind Labour.

Paul was elected as the Welsh Conservative Assembly Member for Preseli Pembrokeshire in May 2007, with 38.6% of the vote and a majority of 3,205.

The National Assembly Elections held on 5th May 2011 saw Paul re-elected as the Assembly Member for Preseli Pembrokeshire, increasing his share of the vote to 42.4%. Shortly after the election, Paul was appointed as Interim Leader of the Welsh Conservative Assembly Group, a position he held until the appointment of Andrew RT Davies AM on 14th July 2011. One of Andrew’s first decisions as Leader was to appoint Paul as Deputy Leader of the Welsh Conservative Assembly Group, and in addition to make him Shadow Minister for Finance.

Paul was re-elected as the Assembly Member for Preseli Pembrokeshire on 5th May 2016, increasing his majority to 3,930. Paul continued as Deputy Leader of the Welsh Conservative Group, Business Manager and Chief Whip. In addition, Paul was appointed as Welsh Conservative spokesperson on Rural Affairs.

In September 2018, Paul was elected as the Leader of the Welsh Conservatives in the Senedd, a position he held until 2021. At the Senedd elections in 2021, Paul was again re-elected with a majority of 1,400.

In June 2021, he was elected Chair of the Senedd's Economy, Trade and Rural Affairs Commitee.

Paul is a prolific campaigner for the autism community in Wales and brought forward draft legislation on an Autism Act for Wales, which whilst wasn’t passed by the Senedd, resulted in significant statutory changes to autism provision in Wales. Paul is also the leading figure of the campaign to better preserve and protect War Memorials in Wales and regularly raises this issue in the Senedd Chamber.

Paul lives with his wife Julie in Blaenffos, North Pembrokeshire and they were married in September 2006. Paul has previously been a member of Boncath Community Council and was a school Governor for many years. His main interests outside politics are rugby, reading, walking and visiting historical attractions.