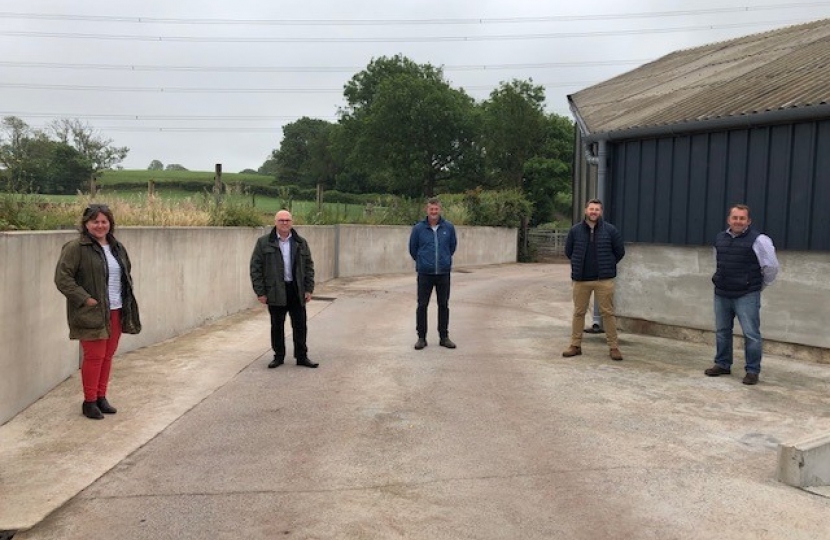 Pembrokeshire Senedd Members Paul Davies and Samuel Kurtz recently met with local NFU representatives to hear more about some of the challenges facing the agricultural sector. Mr Davies and Mr Kurtz heard more about the concerns of local farmers over the Welsh Government’s Nitrate Vulnerable Zones (NVZ) regulations, the implications of the UK Government’s trade deal with Australia and their fears over further regulations on the sustainability of the sector.

Mr Davies said, “I’m grateful to NFU Cymru for arranging the visit and giving Sam and I the opportunity to listen to their concerns on several issues facing the local farming sector. We’ll certainly take those concerns to the Senedd and challenge the Welsh Government over the impact of its NVZ regulations on local farmers. There are also some understandable concerns over the UK Government’s trade agreement with Australia and what that could mean for Pembrokeshire farmers and I’ll certainly raise those concerns with our colleagues in Westminster. We have a farming sector to be proud of in Pembrokeshire and I’ll do what I can to support local farmers and help protect the sustainability of the sector for the future.”

Mr Kurtz said, ““The challenges facing local farmers are very real, from bovine TB to NVZs. Hearing how these issues are impacting on our farmers shows that we have a government in Cardiff that isn’t listening to the concerns of the rural community.”

“Our farmers have supported us throughout the pandemic, growing quality food and keeping us fed. It’s now imperative that they have the necessary support to continue to be custodians of the countryside while feeding the nation. I look forward to working with NFU Cymru going forward and am grateful to Roger Lewis for his kind hospitality and accommodating us socially distanced.”