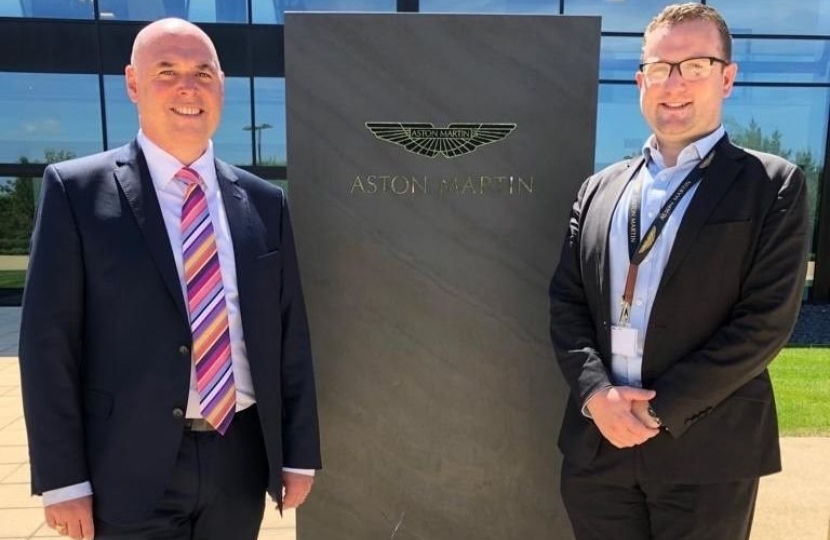 The former whitewashed MoD aircraft hangars which formally stored a number of Hercules cargo planes and all accompanying kit, is now unmistakably the home of one of Britain’s best-known luxury brands.

The fading white has gone and has been replaced by a glass frontage and rich dark panelling. Neat grass and Welsh slate slabs lead to reception, and then on to new office space for the 200 current employees at the site.

The project overall creates up to 1000 jobs, with around 200 employees working onsite today. The vast numbers of whom reflect why Aston Martin was so happy to make Wales its new home, thanks to its rich pool of skilled workers.

Mr Davies met with Scott Ward, Director of the St Athan plant, and Stuart Dee, Government Affairs Manager for Aston Martin, this week to discuss the company’s new home in Wales, and for a tour of the factory floor.

The luxury car brand’s decision to open its second UK plant in South Wales involved a £350million investment from the company, and it is hoped will double the capacity of production.

And thanks to the unique set-up of the three hangars being well-suited to Aston Martin’s production method, the site has been chosen to produce the manufacturer’s eagerly-awaited first SUV vehicle, due to be launched later this year.

Mr Davies was interested to see the brand new production line which is still in completion. State-of-the-art robots are involved with the painting line, and paint extraction from fumes in the air are even captured and recycled to make biofuel.

Despite the company’s disappointment over the Welsh Government’s decision not to build the M4 relief road, the future is bright for the brand’s place in South Wales; with exciting plans to build Aston Martin’s first electric vehicle solely at the new site.

“I thoroughly enjoyed this interesting tour and the opportunity to meet both Scott and Stuart to discuss the company’s future in Wales.

“As one of Britain’s best-known high quality brands, I’m delighted that Aston Martin has also recognised the quality of the Welsh workforce, and the opportunities available here in Wales with their investment in the plant.

“It’s fantastic news that Wales is to become the home of electrification for the company, and I also look forward to seeing the launch of its first SUV later this year.”