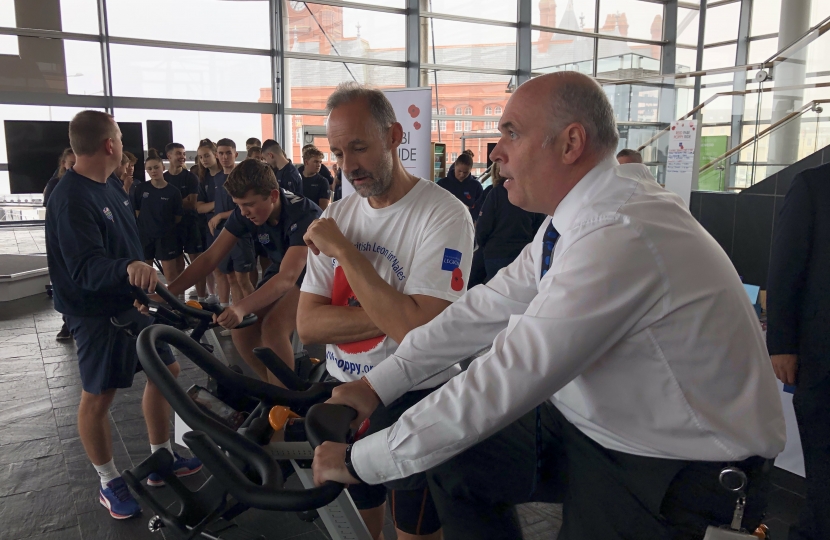 As part of a programme of events to mark the Remembrance period in Wales, local Assembly Member Paul Davies took part in an annual Poppy Ride at the Senedd. Organised by the Royal British Legion, Assembly Members and staff were encouraged to ride for three minute periods on two static bikes kindly donated by Pure Gym Cardiff.  The ride aims to raise awareness of the work of the Legion and the issues of the Armed Forces community in a unique setting. Throughout the event Legion staff were on hand to talk to participants about the unseen sacrifices made by the Armed Forces community, in Wales and beyond, every day. Assembly Members were joined by the Legion’s Area Manager for Wales Ant Metcalfe, Legion staff from across Wales and were supported by students from the local Military Preparation College for Training.

Preseli Pembrokeshire AM Paul Davies said, “It’s always a pleasure to support the Royal British Legion’s annual Poppy Ride. It’s a small but significant way of remembering our fallen heroes and commemorating the remembrance period generally. Our Armed Forces provide an incredible service to our country in so many ways and it was really inspiring to hear more about how the Royal British Legion are helping our servicemen and women.  I’m always heartened to see so many colleagues and staff take part in the event and I was proud to have taken part in the event and supported a worthy cause.”

Ant Metcalfe, Wales Area Manager for the Royal British Legion said: “The Poppy Ride has become a popular event in the Assembly calendar, with the friendly competitive nature of Assembly Members coming to the fore. It provides us with a great platform to talking to the AMs and their staff about the needs of the Armed Forces and veteran community and the work of the Legion in Wales in a relaxed and informal setting. I would like to extend my thanks to every person who came along today.”