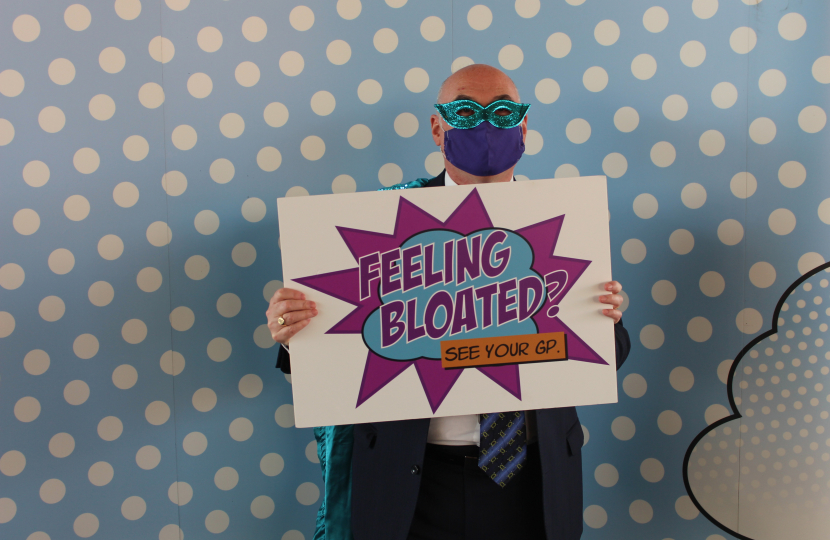 Preseli Pembrokeshire Senedd Member Paul Davies has shown his support for women with ovarian cancer across the region at a special event at the Senedd on March 23rd. MSs were given the chance to dress as “teal heroes” to raise awareness of the symptoms of ovarian cancer, at an event organised for Ovarian Cancer Awareness Month in March. Teal is the colour of ovarian cancer awareness, which continues to be alarmingly low in Wales. Data from Target Ovarian Cancer shows just 27 per cent of women in Wales would be able to name bloating as a symptom of ovarian cancer.

Mr Davies said, “Over 4,000 women in the UK die of ovarian cancer each year, and awareness of the key symptoms remains too low. Symptoms include feeling full, a persistent bloated stomach, needing to urinate more often and/or more urgently and stomach pain – and so if any of these symptoms sound familiar, then please contact your GP. It’s unlikely that your symptoms are caused by a serious problem, but it is important to be checked out. We must come together and act now to make sure everyone knows what to look out for, and that those affected by ovarian cancer face better outcomes and that’s why I was pleased to join colleagues from across the political divide to take part in this year’s Teal Hero event with Target Ovarian Cancer to create some positive progress.”

The Office for National Statistics has today released labour market data for the nations and regions of the UK.

Wales-specific data for January to March 2022 shows a -0.4% change in employment and -0.1% change in the inactivity rate since October to December 2021.